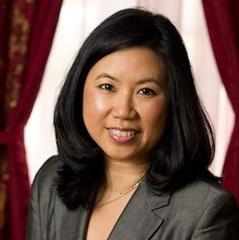 About A. MINA TRAN

A. Mina Tran immigrated to the United States as a refugee with her family in 1975 as a young girl.  She obtained her Bachelor of Arts degree with honors from Boston College in 1991 and received her law degree from UCLA School of Law in 1996.  Prior to founding the firm of Tran Law Group in 1998, she practiced fair housing and employment law, and was involved with class action tort actions against private and public defendants.

Ms. Tran has spoken on issues of small business management, immigration law and workers’ compensation law at Whittier Law School and UCLA School of law.  She has been a guest lecturer at California State University, Los Angeles on immigration business visas. She has been an active member of the Orange County Bar Association serving as secretary of the Immigration Law section and continues to be active with the American Immigration Lawyers Association.

In addition to her practice, Ms. Tran is an adjunct professor at Santa Ana College teaching Immigration Law in the paralegal program and Business Legal Environment.
Ms. Tran is admitted to practice in the Central District Court, the 9th Circuit Court of Appeals as well as the California Supreme Court.