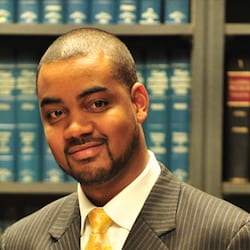 In addition to practicing law, Jamon is a member of the adjunct faculty at Loyola Law School serving as a Professor of Trial Advocacy. He has taught trial skills to law school students, as well as high school students. In conjunction with Los Angeles area law schools, Jamon has helped organize and has served on numerous panels dealing with criminal law, career advice, and other legal issues. In recognition of his active community involvement, as well as his early career accomplishments, Mr. Hicks was nominated for the California Young Lawyers Association’s Jack Berman Young Lawyer of the Year Award in 2007. He was also recognized as a Rising Star for the Super Lawyers and Los Angeles Lawyer publications in both 2009 and 2010. In 2010, he was recognized as a Top 40 Under 40 by the National Bar Association.