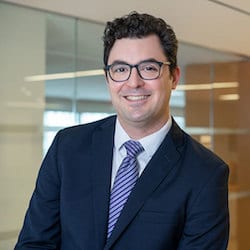 Josh enjoys both the intellectual challenge and the opportunity for advocacy in his work as counsel for trustees in Chapter 7 bankruptcy cases.

Josh represents Chapter 7 bankruptcy trustees in U.S. Bankruptcy Court for the District of Columbia, guiding and advising them as they try to maximize the value of distressed companies. In addition, Josh represents court-appointed receivers in federal and state court actions.

He advises clients on restructuring and insolvency issues, helping bankruptcy trustees administer estates and look for ways to provide recovery for creditors. He has written about jurisdiction and venue issues, and recently presented a continuing legal education program on objections to claims.

In his work for trustees, Josh handles bankruptcy petitions, complaints, motions for relief from stay, objections to claims, garnishment summons and debtor interrogatories.

Josh represents trustees in meetings of creditors, assisting in questioning debtors about assets and liabilities.

Josh is a co-author of the 2016 and 2017 editions of Thomson Reuter’s bankruptcy treatise, Commercial Bankruptcy Litigation, 2d., Chapter 3: Jurisdiction and Venue.

During law school, Josh clerked for the Office of Commissioner Ajit Pai of the Federal Communications Commission, where he drafted speeches, op-eds and other legal memoranda.