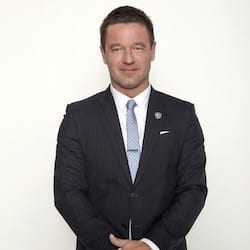 Olivier Taillieu is a distinguished and respected trial attorney. He has tried and won multiple jury trials in his prolific career, and has recovered tens of millions of dollars in verdicts and settlements for his clients. He’s the chief trial attorney of The Dominguez Firm and handles complex and hard-fought cases.

$9,000,000 Settlement against the State of California in a road defect case

$3,000,000 Settlement for a homeless client who suffered a crush injury to his foot against a world renown charitable organization

$2,500,000 Verdict on a premise liability case involving a defective gate

$1,300,000 Verdict for a client who was sideswiped by a commercial truck

$1,200,000 Verdict for a truck driver who suffered a crushed ankle injury caused by a forklift

$915,000 Verdict on a slip and fall case with a torn quadricep tendon injury

$700,000 Verdict in a motor vehicle accident where his client suffered a shoulder injury

Attorney Taillieu has been recognized by his peers as an outstanding advocate for his clients. He was one of five finalists for the prestigious CAALA Trial Lawyer of the Year Award in 2017, and he received the coveted nomination again in 2018. Advocate Magazine featured an insightful article authored by him on traumatic brain injuries. He was a panel speaker at CAALA Vegas 2018.

Taillieu was recently selected to serve on the CAALA Board of Governors, and on the 2019 Consumers Attorneys of California Board (CAOC). He was also nominated for the Leaders in Law award by Los Angeles Business Journal. Olivier has been selected four times to the Southern California Super Lawyers list. He has been named a “10 Best in Client Satisfaction” three years running; and has been named a “Lawyer of Distinction” for 2016, 2017 and 2018. He is a member of the Order of the Coif, the Golden Key Honor Society, Phi Beta Kapa, and the Association of Business Trial Lawyers.

Taillieu, who’s fluent in, English, French and proficient in conversational Spanish, began his career clerking for the Honorable Lourdes G. Baird in the U.S. District Court for the Central District of California and then for the Honorable A. Wallace Tashima on the U.S. Court of Appeals for the Ninth Circuit. He then practiced as a litigator in the Los Angeles office of O’Melveny & Myers, LLP.

Attorney Taillieu’s litigation expertise makes him a sought-after guest on high-profile national and international television shows, including Good Morning America, Nightline, NBC Nightly News, The O’Reilly Factor, and many others.