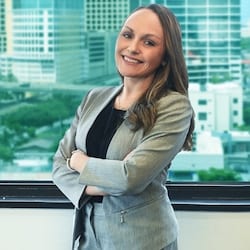 Veronica M. Rabinowitz is the chair of the Litigation Department at the Trembly Law Firm. Veronica comes from a family that owned small businesses and was raised to understand the importance of cultivating trusting business relationships.

Veronica practices primarily in the area of commercial litigation. She has experience in complex business litigation, derivative actions, shareholder disputes, employment disputes, and intellectual property disputes. She also is experienced in handling appeals and has argued before Florida’s Third District Court of Appeal. Veronica was admitted to the Florida Bar in 2012. She was also admitted to the United States District Courts for the Southern and Middle Districts of Florida, and the United States Court of Appeals for the Eleventh Circuit.

Veronica obtained her undergraduate degree in Business Administration from the University of South Florida. While attending USF, Veronica was an active member of the Delta Gamma sorority and held numerous leadership positions. Veronica received her law degree from Florida International University where she graduated in the top third of her class, was on the Dean’s List for several semesters, and received the book award in Entertainment Law. While in law school, Veronica was also an Articles and Comments Editor for the FIU Law Review.

Veronica is a mother to her son Leon and her tuxedo cat, Duchess. In her personal time, she enjoys spending time with her husband and son, reading, and going to the pool and beach. Veronica also participates each year in the Stepping Out to Cure Scleroderma fundraising walk.